"The Deliberate Stillness: Meditation & Yoga Day-Long delivered me from chronic high angst about the wildfires encircling Northern CA at this time to a spacious inner calm and expansiveness that feels like I am living beyond the Ego Mind.  And in this state, I feel alert but not hyper-vigilant, physically worked but restored and lighter in spirit akin to joy.  It was a noteworthy observation to experience this expansive freedom in our last meditation following the yin practice.  These two practices together have a power I had never experienced.  I hope to do more of this with you in your classes and retreats as we move into The Mystery together"  Many many hugs of gratitude from my sequestered life in Oakland, Michelle"

“I wanted to send you a thank you note for yesterday's Deliberate Stillness retreat. Inviting intentional rest and stillness into my home was so very sweet - and so very needed. I find that my "rest" can sometimes take the form of mindless hours on the couch (especially since COVID) and yesterday's practice reminded me how powerful conscious stillness really is. I even feel equipped to make it through (at least) this next week!  Natalie-Oakland

This schedule is subjected to inspirations & impulses... 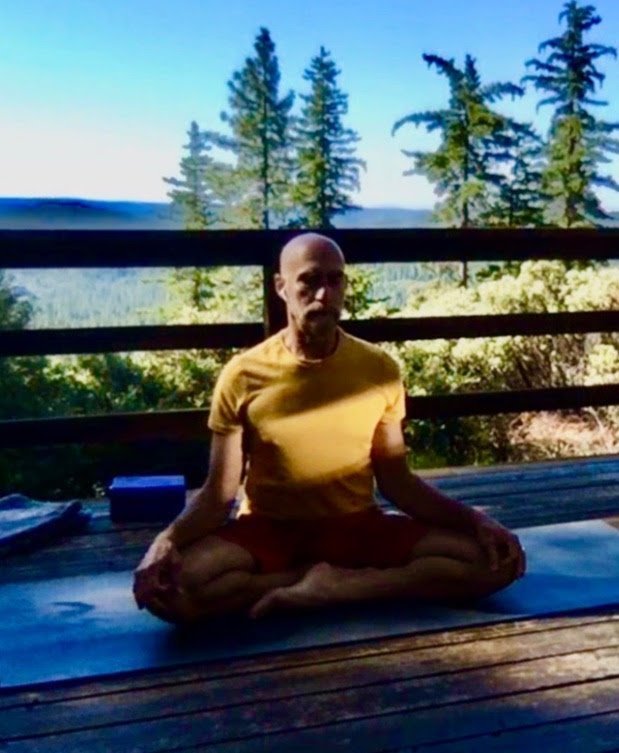 "Thank you so much for that amazing retreat! I have never taken Qi Gong or Yin Yoga and they were perfectly booked ends to the meditation and breathing. It was a nice way to not only spend the day, but to go deeper and find the stillness inside of me, and with everyone even if we were all in our own homes.  It didn’t feel like we were separated... It was very much like I was on a retreat so it worked and it was great!”  Susan—Oakland 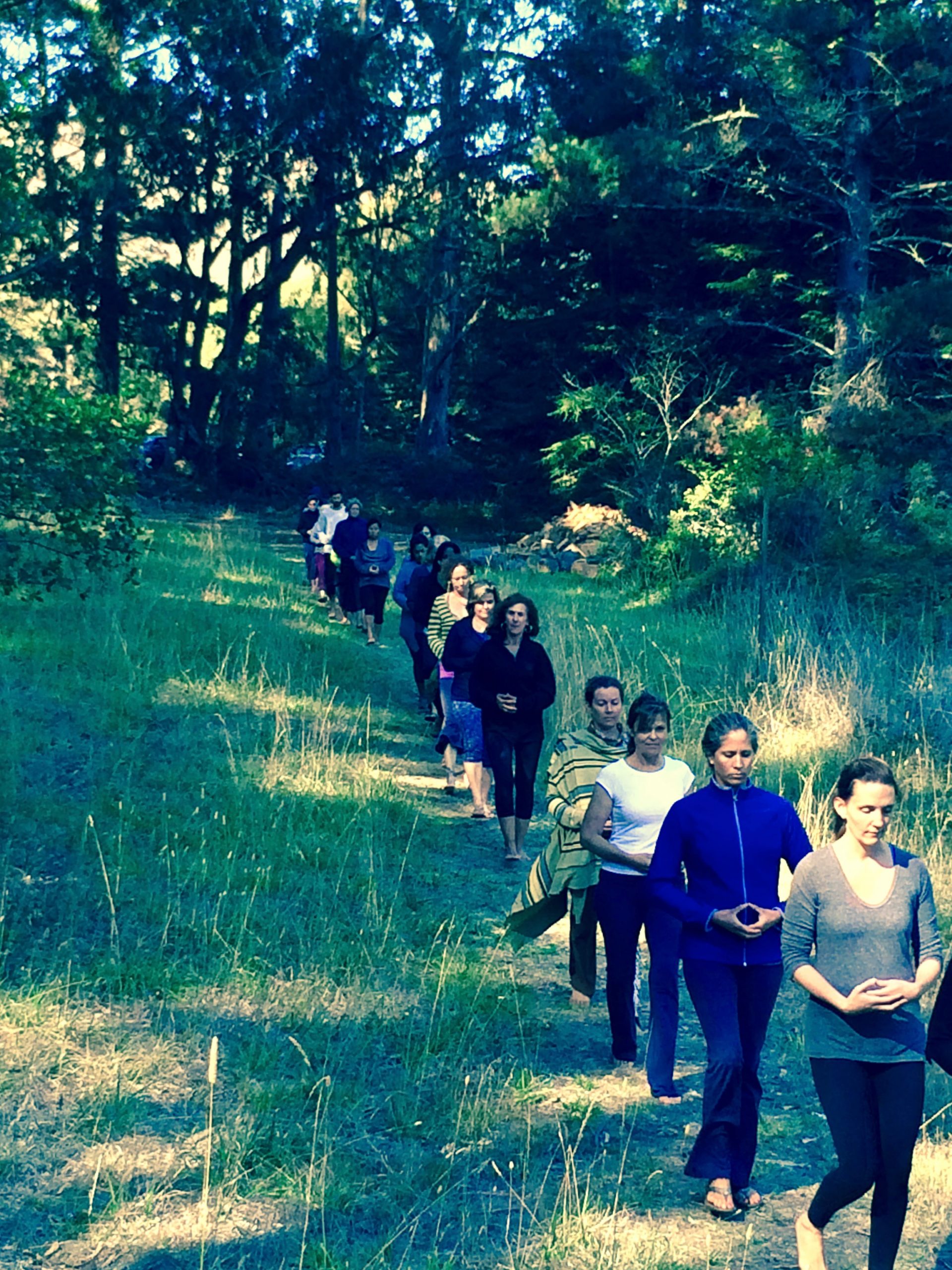 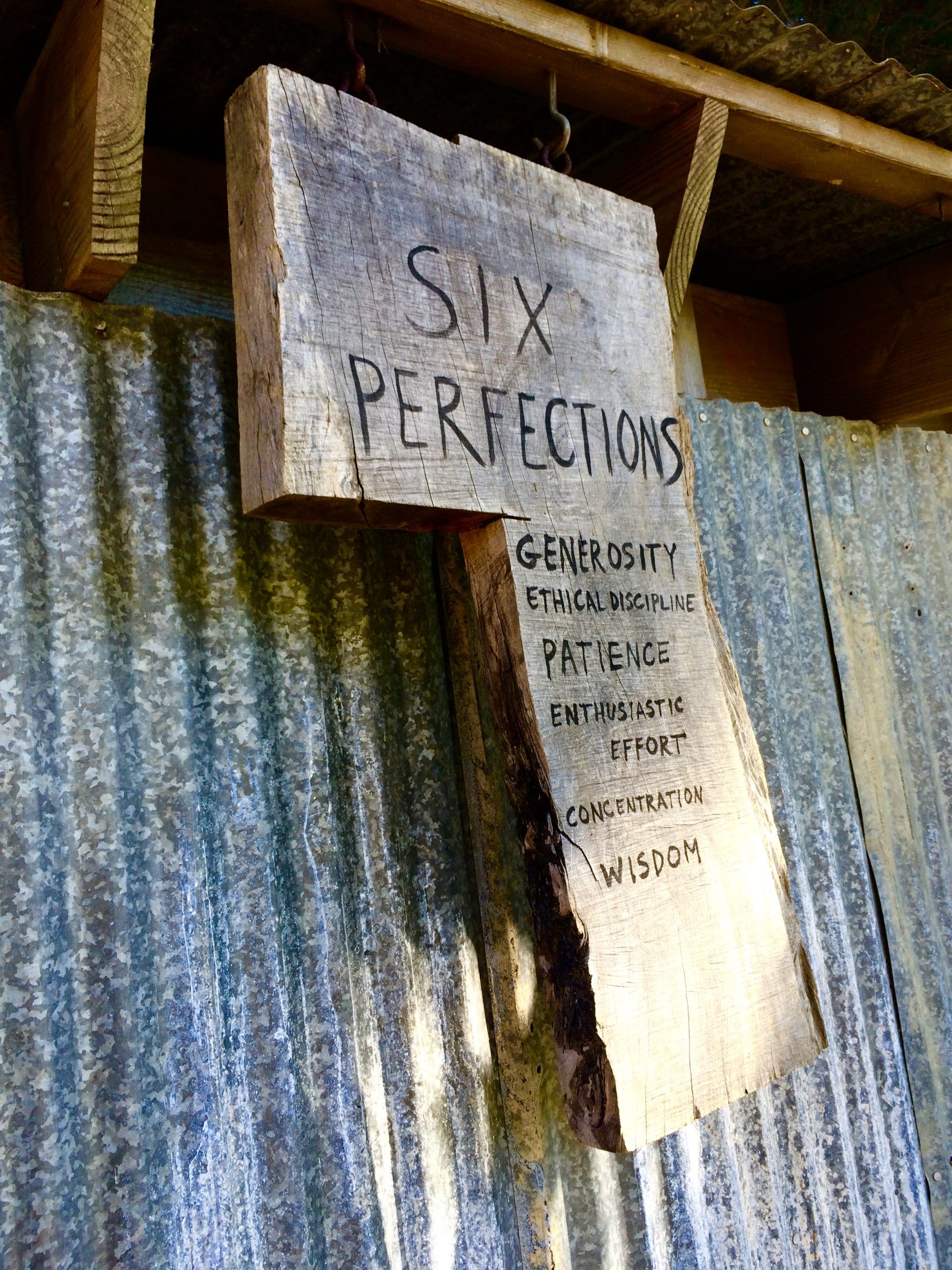 Props:
Props are available on site but it is uncertain at this time of availability due to the pandemic. I'll know closer to our date. If not, please consider having the following props or prop alternative: Block, Bolster (cushion or blankets), Yoga Strap, Blankets, Eye Pillow.

Space: (If attending online...)
Gift yourself a silent space where you can be uninterrupted. Consider flowers, incense or a candle to create a sacred space for you to disappear within. If weather permits create a space outdoors.

On-Site: We will be in the Yurt for this retreat. There is a little time at lunch to stroll to Muir Beach.

Diet:
A plant-based diet is best for this day, potentially the day before and after. Avoid alcohol and recreational drugs, oily and sugary foods. The organic lunch served at Green Gulch is vegetarian.

Silence:
This is a silent retreat, with opportunities to talk during discussion periods.

Carpool: Carpool options will be recommended for those of coming from the east bay or San Francisco. That will be arranged closer to the retreat date, once registration is completed.

Reading: All participants are asked to read, "The Yoga of Somatic Consciousness" below.

“A belated heartfelt thank you, David, for the gift of your time and teaching on Saturday. Despite several attempts at developing a mediation practice - tapes from a day at Spirit Rock with Jack Kornfield and another with John Kabat-Zinn, plus 2 all-day yoga retreats at Green Gulch, I just haven’t been able to integrate this stillness into my life. I very much appreciate your encouragement and perhaps tomorrow, I’ll try the suggested 5 minutes in the morning. Ya never know - maybe this time!... I loved…the QiGong and Yoga Nidra… both were fantastic! … I did come away from this whole day away (door closed) feeling more grounded, more relaxed, strangely content in the midst of the turmoil of my life, and had the deepest sleep that night in a long time. You have a wonderfully open and generous heart; it’s a pleasure to spend time in your company.”  Karen--Oakland 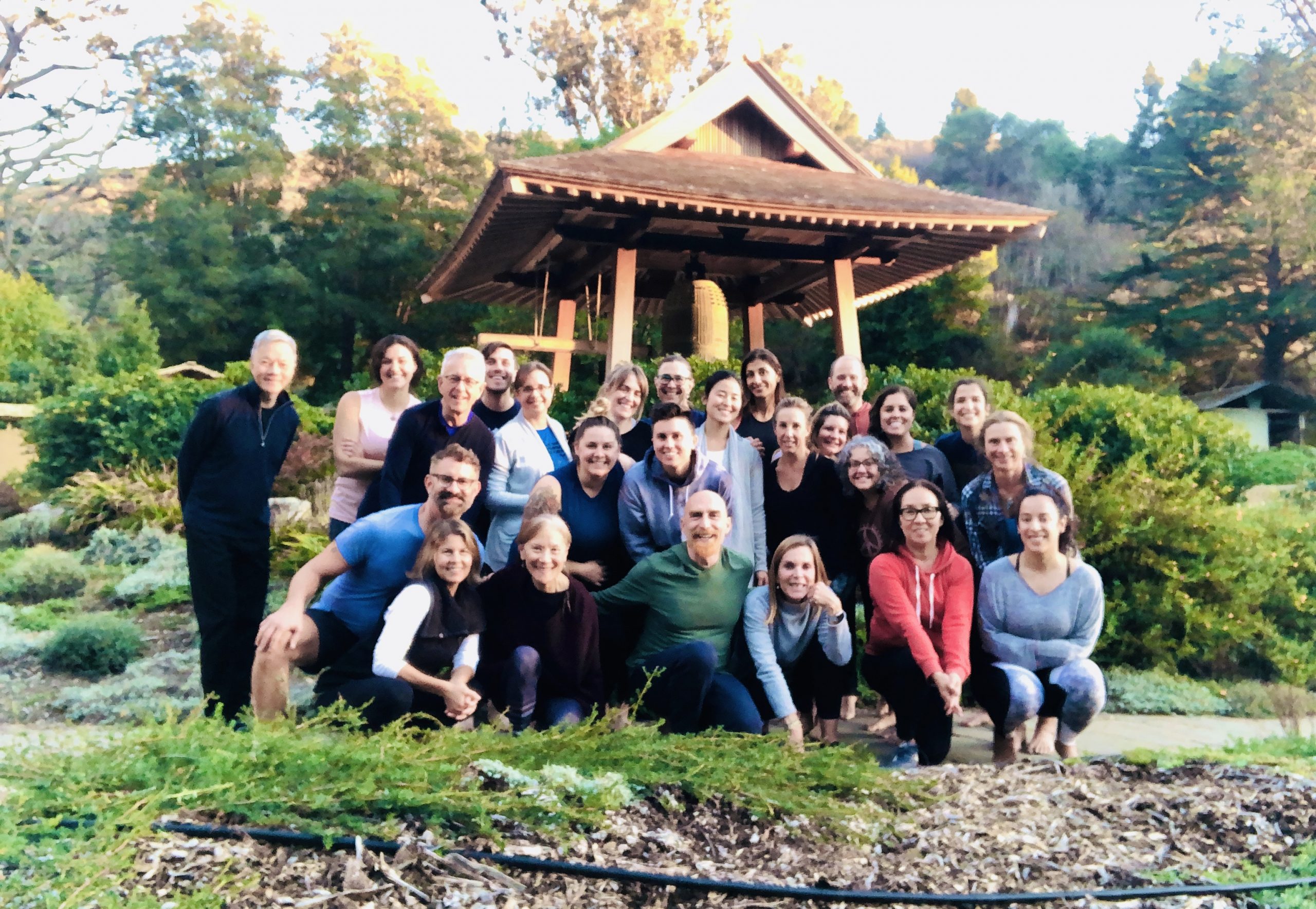 To Register:
Pay through Venmo or Paypal, or send a check 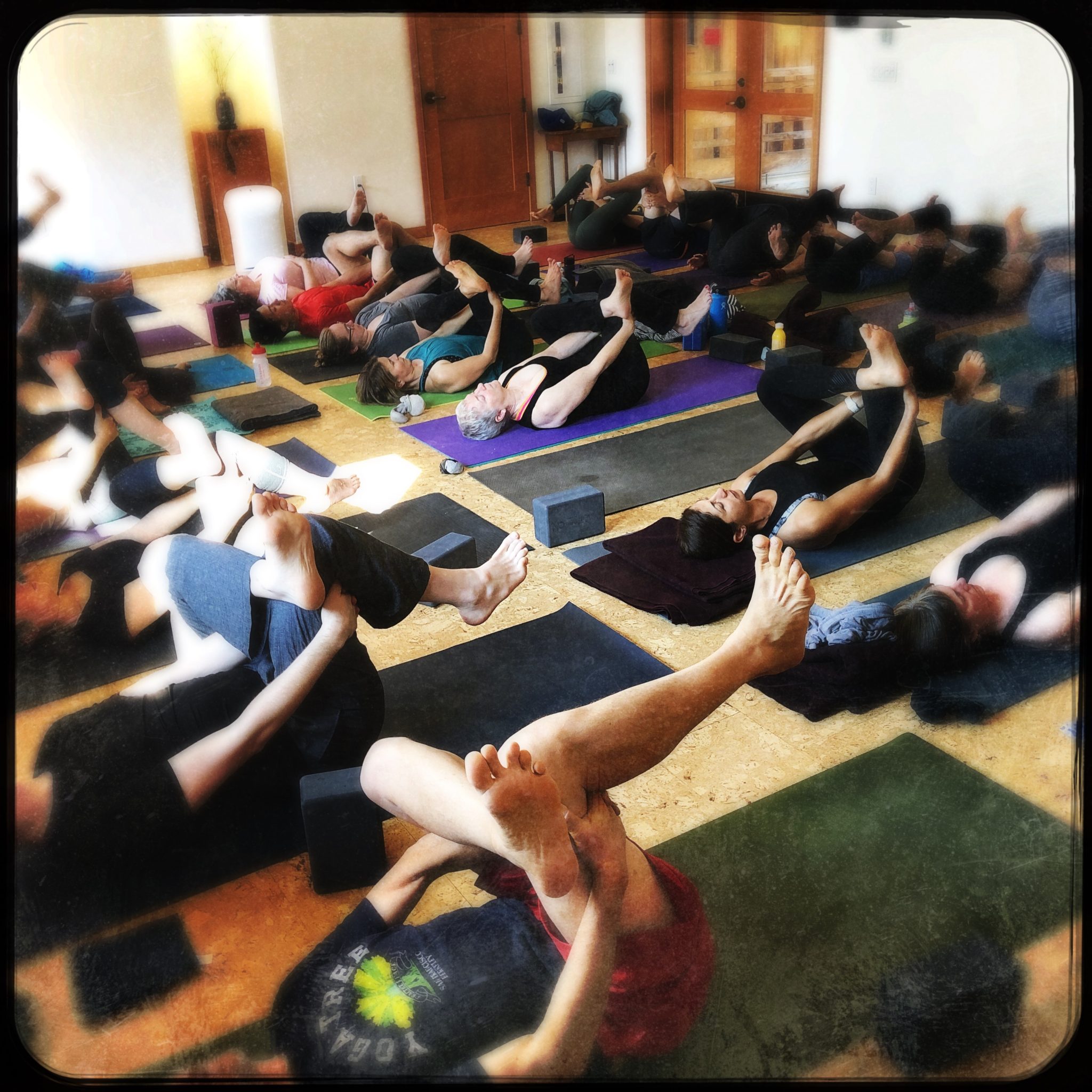 Cancellations:
Reservations cancelled less than 30 days prior to the retreat date are non-refundable. 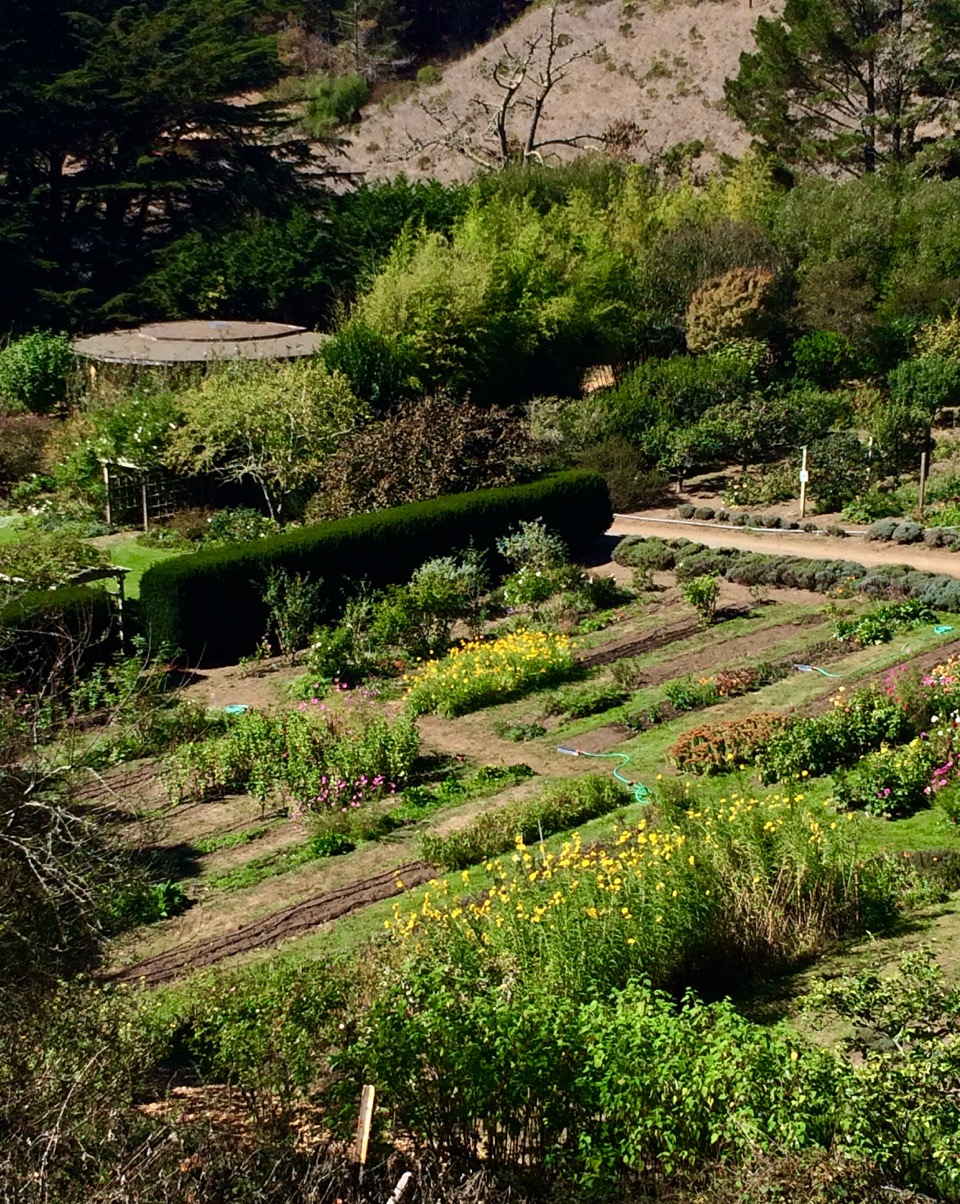 “We really, really loved and got so much out of yesterday’s retreat. Thanks so much. It was a special treat for us that you included Bill so directly.” Marty & Debra – Berkeley

“Apologies for being late to the retreat, and gratitude for your generosity in welcoming me in. I wasn’t sure if I would be able to find a quiet place alone for me for the day. At the last minute, knowing I had the time, I took over the central living room. I cleaned it, lit a fire in the stove to make it cozy warm, moved furniture to make space, and set out my props and computer. Miraculously my housemates were scarce and I had the place to myself for the next six hours! Just this act of claiming space made me feel like I had a bit of control over my life. Your guidance throughout the day was spot on. I particularly enjoyed the Yoga Nidra. I felt deeply at ease and activated simultaneously. Thank you for inviting us into this retreat with you and spending time leading this community. I hope to do another retreat with you.”  Beth-Lee—Vining, CA

The Yoga of Somatic Consciousness

“The only spiritual life you need is not to react. To be calm [or present, in the moment, mindful…] is the greatest asset in the world. It’s the greatest siddhi, the greatest power you can have. If you can only learn to be calm you will solve every problem. This is something you must remember. When you are perfectly calm, time stops. There is no time, karma stops, samskaras stop. Everything becomes null and void. For when you are calm you are one with the entire energy of the universe and everything will go well with you. To be calm means you are in control. You’re not worried about the situation, the outcome. What is going to happen tomorrow? To be calm means everything is alright. There is nothing to worry about, nothing to fret over. This is also the meaning of the biblical saying, “Be still and know that I am God.” [Exodus 14:14] To be calm is to be still.” Ramana Maharshi

When I began attending week-long and month-long Vipassana meditation retreats back in the ’90s physical movement like yoga or Qi Gong was discouraged. Instead, practitioners were urged to keep within the prescribed structure of sitting and walking meditation to enable mindfulness and minimize distraction. During this period yoga was rapidly spreading throughout the country and many serious yogins were infiltrating these meditation intensives. The yogins were coming to these retreats already familiar with discipline and enduring challenging situations, through movement and the physical exercise. So, it wasn’t uncommon for some of us to be stretching or standing on our heads near our tents or in the restrooms, anywhere out of sight while breaking the rules. To just sit, restricting the body for days on end, presented a different type of obstacle for the yogin--the ego’s innate attachment to the body and the pride from identifying with a highly flexible, finely tuned one.

It took decades before meditation centers like Spirit Rock in California began offering combination meditation and yoga retreats, co-taught with yoga teachers who had gone through their Buddhist studies program. The inclusion of yoga was a welcome addition, yet the integration of yoga into a silent retreat was often not as seamless as one might think. The movement from cushions to yoga mats, the reorganizing of the room, the often-excessive verbal instruction of the yoga teacher compared to the mostly silent instruction of the meditation teacher made these two very similar disciplines feel distantly related. Yet, those experiences inspired me to find a way to more efficiently integrate these two paths with one goal.

For me the most important and pleasurable part of teaching yoga has evolved to focusing on postures and practices that bring instantaneous shifts in consciousness, creating a deeper union between the mind/body and the field of awareness that the mind/body appears within--instead of a mindfulness practice, more of a mindlessness experience. The result naturally allows an integrated meditative state to arise spontaneously, whether standing, moving, holding or sitting. This experience is created by using specific elements and sequences from Qi Gong, somatic therapeutic modalities, various yoga pranayamas, kriyas and particular asanas, all of which can elicit an immediate impact on the nervous system and the body’s connective tissue—myofascia. I also weave the open meditation practices of Dzogchen Buddhism and the Shakti Bandha--energetic cultivation and release modalities--found in the tantras of Kashmir Shaivism. In doing so, this causes the active thinking part of the mind to instantly settle and at the same time expand into Shiva consciousness, or as the Buddhist refer to it, the Big Sky Mind.

My role then, as an instructor, is to design the grouping of postures, movements and practices, to evoke and then point out when this collective state of awareness is happening. Students then may become more familiar with its nature and to recognize, not only their internal experience but also the external collective experience as being one and the same. When this is experienced by each student at the same time, whether in a classroom setting or over Zoom, the energetic nature of the room perceptibly expands—consciousness is experienced as something palpable. We truly are one, we are eternal, in that moment presence is all that is happening. The student is no longer an individual sitting in a classroom having their individual experience but a communal experience of authentic nature as one united field of consciousness that can be felt beyond the senses--but includes the senses. Within this non-dualistic approach its silent nature is heard, its infinite nature touched…“Namaste” suddenly transcends cliché and is realized as something genuine and boundless.

“Few skills are more essential than the ability to settle your body. If you can settle your body, you are more likely to be calm, alert, and fully present, no matter what is going on around you. A settled body enables you to harmonize and connect with other bodies around you while encouraging those bodies to settle as well. Gather together a large group of unsettled bodies or assemble a group of bodies and then unsettle them--and you get a mob or a riot. But bring a large group of settled bodies together and you have a potential movement--and a potential force for tremendous good in the world. A calm, settled body is the foundation for health, for healing, for helping others, and for changing the world.”  “My Grandmother’s Hands” -- Resmaa Menakema