The Posture of Royal Ease

Pose of The Week: 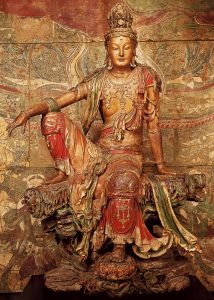 The Buddhist goddess Kuan Yin is the perfection of compassion, mercy and kindness and is often shown sitting in the “Posture of Royal Ease.” This posture is more of a “bhava” than asana and brings about an immediate state of grace, dignity and confidence. While there are many different spellings for the world Kuan (Guan, Kwan) Yin is always spelt the same and in this context means one who hears, who observes the cries of humanity. This week we did the Posture of Royal ease as a means for getting into Anantasana (Vishnu’s Couch Pose.) Kuan Yin was originally depicted as a man in China but later morphed into a female goddess. Most images of Kuan Yin are actually gender-neutral.